Goals: The objective of this project is to develop a reliable and cost-effective surface system to localize and track multiple underwater targets to provide the latter with navigational aid and/or follow their state of progress as a mission unfolds, using a maximum of 2 autonomous surface vehicles (ASVs) equipped with acoustic-based range measuring devices.

Under the conditions offered by the Access Provider, joint preparatory work by UNED and IST-ID and several field trials were carried out involving multiple autonomous vehicles working in cooperation. Namely, two surface autonomous vehicles, called trackers, and an underwater autonomous vehicle, called target, have been employed. In this scenario, successful trials have been carried out in which the two surface vehicles were operated in a collaborative manner to track and localize the underwater vehicle using acoustic range measuring devices.
The information gathered by the trackers can be used as navigation aid for the underwater vehicle or for localization and monitoring tasks. The results of the trial were quite encouraging in that the trackers could not only estimate the state of the target well but also converged smoothly to and maintained an optimal formation (in an estimation-theoretical context) with respect to the target, while maneuvering within a desired vicinity of it. The field trials focused on the testing of a "cooperative distributed simultaneous localization and mapping (SLAP)" algorithm developed and implemented jointly by the DSOR group at IST Lisbon and UNED that is rooted in and expands previous work done by IST and UNED on the topic [1, 2, 3].
The access to the complex infrastructure needed to develop the project was not available at UNED. Thus, the conditions provided under the TNA call have definitely been a key enabling factor to bridge the gap between theory and practice, a step that will pave the way for the development of a new breed of cost-effective, simply to deploy and operate underwater tracking and navigation systems. In addition, the access to the infrastructure has afforded the participating team the experience required to assess the possibility of implementing a similar structure in the near future at UNED, as means to advance R&D in these timely and challenging area of research.
In order to test the SLAP algorithm we used three Medusa-class vehicles (Medusa-red, black, and yellow) that are property of IST.  The Medusa yellow acted as an underwater target while the other two vehicles (Medusa red and black) played the role of trackers. In this setup, the trackers communicated with each other using the WiFi-UDP protocol. The ranges from the trackers to the target were measured using acoustic devices manufactured by Evologics.  Regarding the pursuit task, the two trackers were set to move behind the target and maintain a distance of approximately 15 meters to the target while keeping the relative position vectors from the trackers to the target orthogonal for optimal target state estimation purposes. 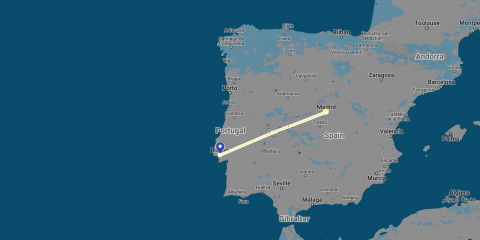 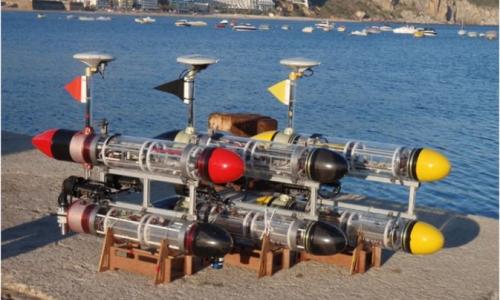 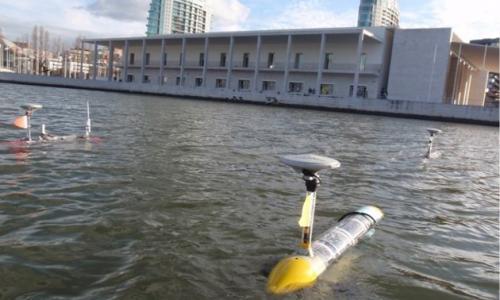 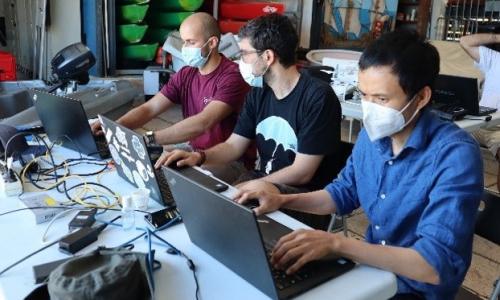 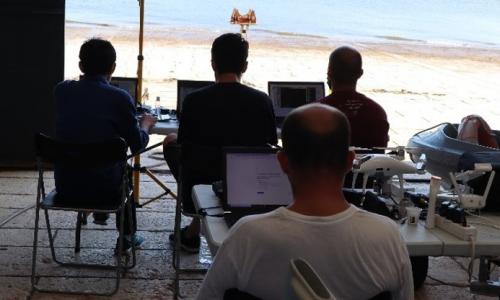 The results obtained are now being analyzed in detail in preparation for a joint UNED/IST-ID peer reviewed journal publication.
The dissemination of results will be done through scientific publications (in at least one peer reviewed journal and international conferences), the webpage of the group (https://gi3.dia.uned.es/), and several activities aimed at transferring the knowledge obtained with the project to companies. Furthermore, IST-ID and UNED plan to make the software package for simultaneous localization and target pursuit open access.